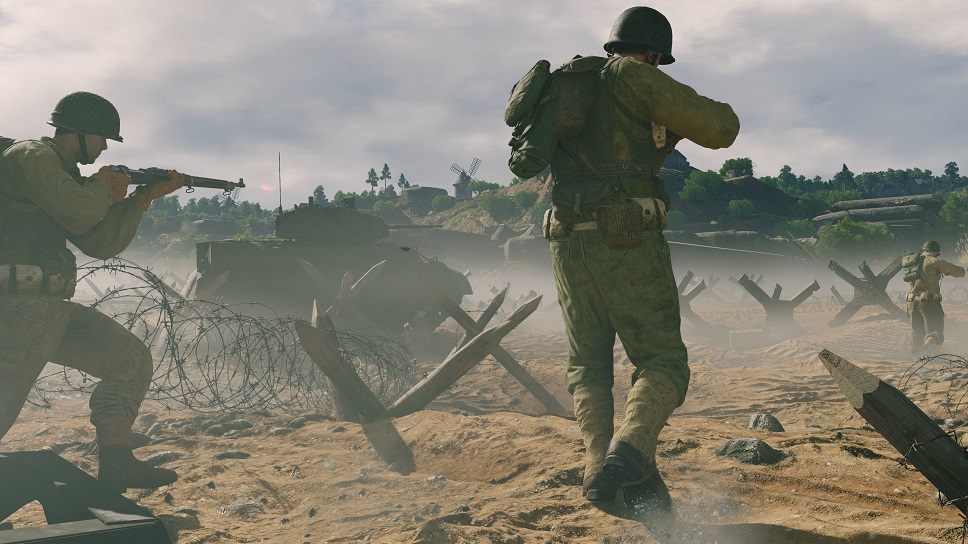 Here comes another collection of answers from the devs to your questions, gathered from our social networks and the official Enlisted Discord channel. Don’t worry if you can’t find your personal questions, it might appear in a future Q&A.

Q. Will the game be distributed via Steam or other distribution platform?

Currently, we plan to distribute the game via the Gaijin launcher, but it is too early to announce any agreements with other platforms.

Q. Any plans to release Enlisted on consoles?

We are already planning a console release of Enlisted. Currently, the game is well optimized for the new generation consoles, and we are constantly working on performance improvements.

Q. I’d like to play with my friends in one session without joining using “one-two-three-join!”. Will you implement something to the upcoming gaming tests?

We are already testing this functionality on internal tests and it will definitely be in the next tests for players. At the moment, we are thinking about additional advantages and opportunities that such a battle group can provide.

Q. Is “120-150 soldiers” still the theoretical maximum for one session, or will there be some changes?

Currently, we have successfully tested sessions of up to circa 140 soldiers in one battle. We completed many rounds of server optimizations to make this number possible with the current level of interaction of soldiers in the environment, the number of gaming events per time, and combat intensity. However, the number of soldiers is limited not only by the capabilities of our servers, but also by the capabilities of player hardware, and we are still working on further optimization of both the client side and the server side. It is also worth noting that the more fighters per area, the greater the combat intensity is in the given area, and it is reasonable for players to give more room to maneuver so that the battle does not turn into chaos and a meaningless meat grinder. We will try to realize greater freedom in other gaming modes with other combat missions, so then we can better imagine the upper technical and gameplay limits for different modes.

Q. We took part in gameplay tests of two very distant episodes of the war, different in time and different in fighters.We may become confused in how they will be used and also squad progression.

Enlisted is a project that combines well-known military campaigns from different countries and different episodes of WWII. Previously there was a chance to test missions from the  Battle for Moscow and the Battle for Berlin campaigns. Every campaign consists of many missions with different objectives and content: locations, weapons and equipment, vehicles, and, of course, nations.

We plan to separate squad progression in every campaign. If you have several campaigns you may switch between them right in the game client with a couple of mouse clicks.

Check the FAQ section on the official Enlisted website to find out more about our plans to realise content in our game.

Q. In which languages will Enlisted be localized?

In the early stage Enlisted will be available in the Russian and English languages. There are partial translations into German, French, Japanese, Korean and Chinese, but they are not 100% supported in the current version of the game. New localizations are possible in future.

Q. Will progress from one campaign transfer to another?

Content associated with one campaign (i.e. squads and equipment) will be tied to that campaign. It is logical that an IS-2 from the Battle for Berlin campaign (1945) could not take part in the Battle for Moscow (1941). Game currency, battle pass, and battle coupons will be common for all campaigns.

Q. What is the maximum location size we can expect in Enlisted? We saw the Battle of Moscow and the Battle of Berlin, the size of which corresponded to modern FPS games, but some players would like to participate in battles where it takes several minutes to get to the enemy using vehicles.

Depending on the campaign, the location size can reach several square kilometres. Game designers use separate map areas to create thematic missions. The scale of the area for different types of troops may vary. For example, in one mission, soldiers might throw the enemy  500 metres back, vehicles are provided with an additional corridor of several hundred metres, and aviation has an area of ​​several kilometres above the battlefield. Thus, we implement a different scale of the battle within one session.

Currently, we are testing different scales of a battle to reach a suitable balance between distances and combat intensity. It is worth noting that we are currently honing the most popular and accessible game modes for beginners - Domination and Assault. But we are planning other game modes designed for a more niche audience.

Q. What vehicles, except tanks and aircraft, are planned for the game? Will we see armored vehicles, as well as non-military equipment such as trucks?

You will definitely see and be able to control a large number of armored vehicles and light combat vehicles in the game. The use of special equipment will depend on the game modes, and during the development of the project and the mission mechanic we can add more and more interesting vehicles.

Not only tracked, but also wheeled vehicles, and aircraft of course!

Q. Do you plan on implementing aviation as classic squad equipment, or shall we expect AI-controlled aviation as a game event, for example “call a bomber raid’?

At the moment we don’t plan such mechanics as we are working on player-driven gameplay, such as pilots in strike and bomber aircraft.

Q. AI squads are a very remarkable feature of the game. We have seen how you improved their behavior in the second test but we would like to know more about your future plans for this important gameplay feature. What will the AI learn in the future, what would you like to teach it, and will we have a wider choice of teams?

We plan on telling you about our work on the AI in separate devblogs. We have already re-designed the target selection mechanics and continue to work on many interesting and necessary, in-battle mechanics.

One of these mechanics will entail a more developed and detailed control of the squad with the ability to appoint your soldiers with a preset behavior. The choice of contextual commands will also be increased. For example, it will be possible not only to attack an enemy vehicle but also to give an order to storm fortified positions.

Also we consider the ability to choose hideouts and better use of the surrounding space an important part of AI behavior. We have taught your soldiers how to choose targets for attack but the movement of the positional battle in most games immediately marks the player which will be controlled from AI - they can not handle and hide as intelligently as a real player.

We have already written an algorithm for Enlisted at the stage of the location creation that looks for possible hideouts under the given parameters where the AI can already choose the most suitable from these hideouts for the current battle situation. There are already thousands of hideouts in locations that can be used by AI soldiers. We plan to improve the algorithm so that they can use tens of thousands of hideouts.

Q. Will we be able to install cannons and make fortifications?

Such opportunities are planned; these works will require special soldiers in one’s squad who will be specialised in construction.

Q. At the moment, wounds simply result in a decrease of a soldier’s health level. Will it stay this way in the future or will you develop an injury system? For example, up to a level where an injury of the limbs will affect movement, aiming, retention of the recoil etc?

We are not planning on implementing this at the moment but it may change as the project develops.

Q. Will we have bayonets on some guns?

Yes, we are developing separate animations and mechanics for bayonets.

Q. In shooter titles, players usually prefer a better view and a reduced graphic setting by removing some effects and simplifying, for example, vegetation settings. In pre-alpha tests graphics didn’t differ much in different settings. Is this your conscious decision or will the effect of the settings be changed?

It is a conscious decision and we plan to stick to it in the future. Deteriorating the graphics settings will only improve the performance but will not give the player any significant advantages.

Q. The destruction of small objects and fences looks good, but are there any plans for larger buildings?

There will be no destruction for larger buildings. The explosive mass in tank shells are too small to consistently cause serious damage, even to small wooden houses. You may notice a lot of historical photos where heavy aircraft bombs, rather than armoured vehicles or explosives, caused the main destruction. Only in the most difficult cases would crew spend their valuable shells to destroy defensive positions in a building, but even so, the building would not be destroyed. That’s the very first reason. 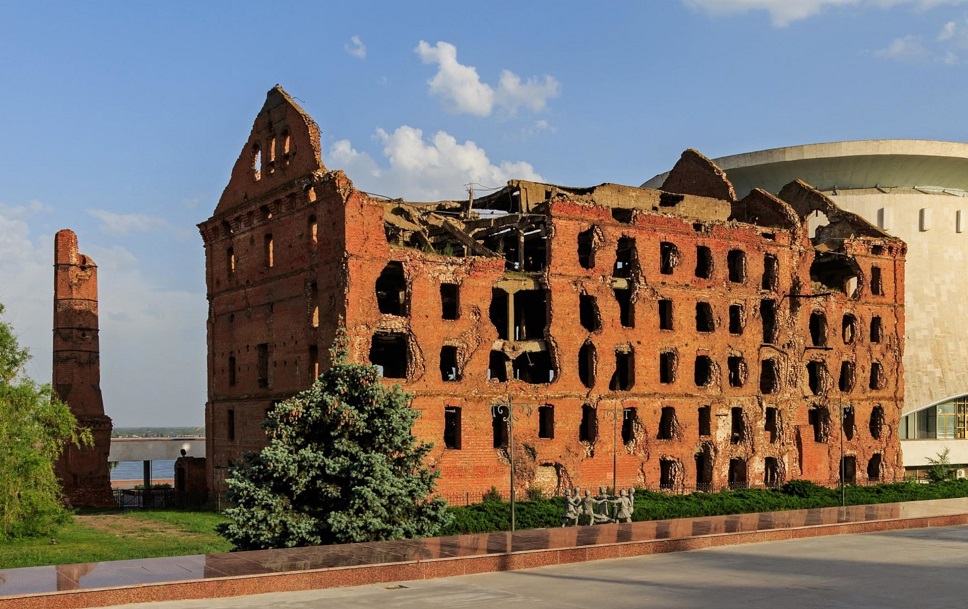 Grudinin’s Mill in Volgograd (Stalingrad), was surrounded and under fire for 58 days

The second reason is due to game design. Even by accurately recreating the government quarter of Berlin, we added intermediate capture zones which are markers of your team’s progress. The possibility of their complete destruction will literally destroy the balance by depriving the attacking side of the opportunity to gain a foothold on a position. You were able to see such situations during the second test when one of the points, which was reinforced with sandbags, could be completely destroyed and the attackers had to lie in the bare field while under the fire from many other positions.

At the same time, we understand the importance of positional battles and therefore, for example, log houses can be penetrated with large calibre weapons and even machine guns. We will continue to pay attention to such details in the future.